PHOENIX VOYAGE
BACK TO 'PURSUIT OF TRUTH' MAIN MENU
To answer the Nikola Tesla quiz questions you will have to read about facts and events in the life of the most outstanding and mysterious scientist ever, who was well ahead of his time. Interesting pages of Tesla’s biography and the origin of his inventions will not leave you indifferent. 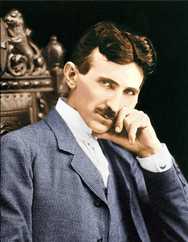 Nikola Tesla (Serbian; (10 July 1856  – 7 January 1943) was an inventor, mechanical engineer and electrical engineer. Over 275 important patents have gone unknown to the public and in our schools. We are on the threshold of a new world with Free Unlimited Energy... which was Tesla's dream.  He was one of the most important contributors to the birth of commercial electricity.....enjoy videos and websites to learn about this great humanitarian!

2017 UPDATE! Exposing The Death, Theft & Cover Up of Nikola Tesla

For those who are not familiar with Nikola Tesla or for those who are looking for the perfect summation to pass onto others, this is the  video to share.  13:44 min. The truth shall prevail.

Highly recommended article and video to spend some time on.

The Tesla Science Foundation is a 501 (c)(3) nonprofit organization dedicated to promoting the life, legacy, and scientific innovations of Nikola Tesla. Today, our Foundation is the most active Tesla related organization in United States having successfully hosted numerous lectures, seminars, forums, to include our annual Energy Independence Conference. Through its dedicated efforts, TSF have attracted large numbers of scientists, engineers, artists, students and other Tesla enthusiasts worldwide. Visionary and scientist Nikola Tesla is included in the UNESCO Memory of the World register and was voted one of the 100 most influential Americans of the 20th Century.

The "Tesla Collection" is the most comprehensive compilation of newspaper and periodical material ever assembled by or about Nikola Tesla. The Collection begins on August 14, 1886 and continues through December 11, 1920. Comprising approximately 1,700 separate items totaling more than 4,200 pages, the Collection is drawn from both American and British publications and is reproduced directly from the original English Language material.

A recently discovered set of original Nikola Tesla drawings reveal a map to multiplication that contains all numbers in a simple to use system. The drawings were discovered at an antique shop in central Phoenix Arizona by local artist, Abe Zucca. They are believed to have been created during the last years of Tesla’s Free Energy lab, Wardenclyffe. The manuscript is thought to contain many solutions to unanswered questions about mathematics.

Once, in 1899, Nikola Tesla had an interview with a certain journalist John Smith, when Tesla said “Everything is the Light“. In one of its rays is the fate of nations, each nation has its own ray in that great light source, which we see as the Sun. In this interview this greatest inventor and seer of modern time unravels a new vision of humanity which we, the light warriors of the first and the last hour have created a century later. A must read for every Ascended Master from the PAT.

Part of this interview is dedicated to Tesla’s critics on Einstein’s theory of relativity that discards the ether as energy. I have proved in the new Theory of the Universal Law why Einstein’s theory of relativity is entirely wrong and why there is no vacuum (void), and that everything is energy. Thus I confirm Tesla’s ideas as expressed in this interview.

This technology and information can and will quite literally change the world overnight. Jim Murray needs your help to get his energy paradigm shifting information out to the public

Marc J. Seifer has been featured in The Washington Post, Scientific American, Publisher's Weekly, Rhode Island Monthly, MIT's Technology Review and The New York Times. In Europe he has appeared inThe Economist, Nature and New Scientist. With publications in Wired, Cerebrum, Civilization, Extraordinary Science, Lawyer’s Weekly, Journal of Psychohistory and Psychiatric Clinics of North America, Dr. Seifer is internationally recognized as an expert on the inventor Nikola Tesla (the subject of his doctoral dissertation) and the acclaimed biography Wizard: The Life & Times of Nikola Tesla.

Hi, my Name is Niffer Desmond.  I am an artist, an explorer of mysteries and a major fan of the Father of our modern age, Nikola Tesla!  Because once you learn about Nikola and all the amazing things he invented and predicted for our present day, you have to wonder- why didn’t I hear of this guy before?!Thankfully many have taken on the mantle to tell us the story of this amazing man; So many great books, artworks and films and even cars have been made to bring his life to light. Yet there was still one thing missing, something that the world is long overdue for- a Nikola Tesla coloring book!

Tesla tranformed our civilization, giving rise to billion dollar corporations, yet he himself died in poverty, forgotten in a New York hotel room. For someone who gave so much to be rewarded with so much obscurity is absolutely criminal. Please share this video with others as a tribute to Teslas legacy.

Wardenclyffe Tower (1901--1917) also known as the Tesla Tower, was an early wireless telecommunications tower designed by Nikola Tesla and intended for commercial trans-Atlantic wireless telephony, broadcasting, and to demonstrate the transmission of power without interconnecting wires. The core facility was not completed due to financial problems and was never fully operational.

Demonstration of a working machine and the explanation of the source of energy.

Support a Statue of Tesla in the  Silicon Valley

Nikola Tesla is an under-recognized inventor who was instrumental to our mainstay system of electricity transfer (alternating current) and made hundreds of significant and groundbreaking inventions in areas of wireless energy, wireless communication, magnetism, radio, x-rays, cosmic rays, radar, robotics, engine-powered aircraft and much more. Silicon Valley enjoys an elevated lifestyle derived from advancing the foundation Nikola Tesla helped lay.  This project pays respect to the person who used his brilliance to advance society, not for personal wealth.  The Tesla Statue can inspire entrepreneurs - who come here from all over the world - to think similarly, especially on big topics like energy and wireless information transfer.

An Educational Production Matierial for Schools

New Voyage Communications in Washington, D.C., has developed a unique, in-depth television documentary about the life, times, and legacy of Nikola Tesla, American inventor and visionary. This program is the result of years of research, in which many new and unknown details of of Tesla's life have been uncovered. The production contains a large and extremely rare collection of photographs documenting Tesla's life and his inventions. A companion book for the program has been published by Barnes and Noble Books, and is currently in bookstores across America.

A Great Resource For everything Tesla.

Early in 1997 the Tesla Wardenclyffe Project purchased historian Leland Anderson's archive of some 750 photos related to Tesla's life and work. It is believed to be the largest collection of its type in the world outside of the holdings of the Nikola Tesla Museum in Belgrade. The images concern Tesla's life and his career, laboratories, apparatus, celebrations, and commemorative events following his death.

Charged: The Story of Nikola Tesla

Tesla and Katherine is a feature film about the life and love of Nikola Tesla, the greatest inventor of the 20th century.
These pages exist to keep you informed and up to date with the movie, which is currently in pre-production. Click on the menu to find out more, and feel free to send us your feedback or participate in the discussion forums.

On January 7th 2012, the Anniversary of the death of one of history's most brilliant scientists, Nikola Tesla, we will stand together and demand his research into harnessing electricity from the ionosphere, at a facility called Wardenclyffe, be released to the public.
“Let the future tell the truth, and evaluate each one according to his work and accomplishments. The present is theirs; the future, for which I have really worked, is mine.” -Nikola Tesla-

"My Inventions" - a short film bio-pic about Nikola Tesla Video

Nikola Tesla movie -- Most amazing man who ever lived!

Tesla Believed that the practical application of MECHANICAL THERAPY through his oscillators will profoundly affect human life. By insuring perfect regularity of evacuations the body will function better in every respect and life will become ever so much safer and more enjoyable. One of the most important results will be the great reduction--amounting possibly to seventy-five percent--in the number of heart failures, which are mostly caused by some acute upset of the digestive process and normal operation of the stomach. Another vital improvement will be derived from the quickened removal of toxic excretions of organs affected by disease. It is reasonable to expect that through this and other healthful actions ulcers and similar internal lesions or abscesses will be cured and relief might be obtained even in cases of a cancer or other malignant growth. Skilled physicians and surgeons will be able to perform veritable miracles with such oscillations.

No doubt about it, Nikola Tesla is the greatest mind since da Vinci. So who is this genius?

Early predictions made by Nikola Tesla about our future are now coming true as major discoveries in science continue to be suppressed.

The Nikola Tesla patent lists on this site represent the result of meticulous research at a branch of the U.S. Patent and Trademark Office by Jim Bieberich, Patent Historian. Bieberich's Tesla Patent Collection is considered a world standard of research accuracy .U.S. Patent Office records were searched for all patent types (utility, design, reissued) as well as for Trademarks. Contained herein is the complete U.S. listing of Nikola Tesla's patents arranged in chronological and alphabetical order.

Tesla is an excellent study in the power of creativity and visualization. Many say he single handedly created the 20th century with his 700+electrical patents, 1500 inventions  and his discovery of Alternating Current, radio and remote control, the computer "AND" Logic Gate, the bladeless turbine and his micro-pump (with no moving parts). His discoveries of over a century ago are still bearing fruit to this day.

3rd and 4th Graders undertook this project because Tesla is America's FORGOTTEN SCIENTIST OF EPOCH DIMENSIONS and merely A FOOTNOTE IN HISTORY AT THE SMITHSONIAN (But that's OK, who needs the Smithsonian?) TESLA: OMITTED IN SCHOOL TEXTBOOKS, OMITTED IN TECHNICAL JOURNALS, UNKNOWN EVEN TO SOME ENGINEERS, HIS WORK UNKNOWN OR UNDER APPRECIATED (This does not speak well for our media.)

They Say He Came From The Future... Video

SEE the man who changed our WORLD! Why is it that you still do not know his name? The Greatest Inventor of all TIME... from Tesla's Ambassadors!

Tesla Memorial Society of New York is celebrating its 27th anniversary. It was founded in Buffalo, New York in 1979. It is the oldest Tesla society in North America dedicated to keeping the memory of Nikola Tesla alive. We are committed to the pursuit of science, progress and brotherhood among all nations and religions around the world.

The San Francisco Tesla Society is a grass roots organization which promotes the advancement and greater public awareness of science.

Nikola Tesla Museum is a unique institution of science and culture in Serbia and in the world. It is the only museum in the world which preserves the original and personal inheritance of Nikola Tesla. It possesses several exceptionally valuable collections:
160 000 original documents, 2000 books and journals, 1200 historical technical exhibits, 1500 photographs and photo plates of original, technical objects, instruments and apparatus,1000 plans and drawings. ​

This video was produced in honor of the spirit of Nikola Tesla, and all the inventors that carry his flame around the world, you must keep working to help humanity, this planet and our future.